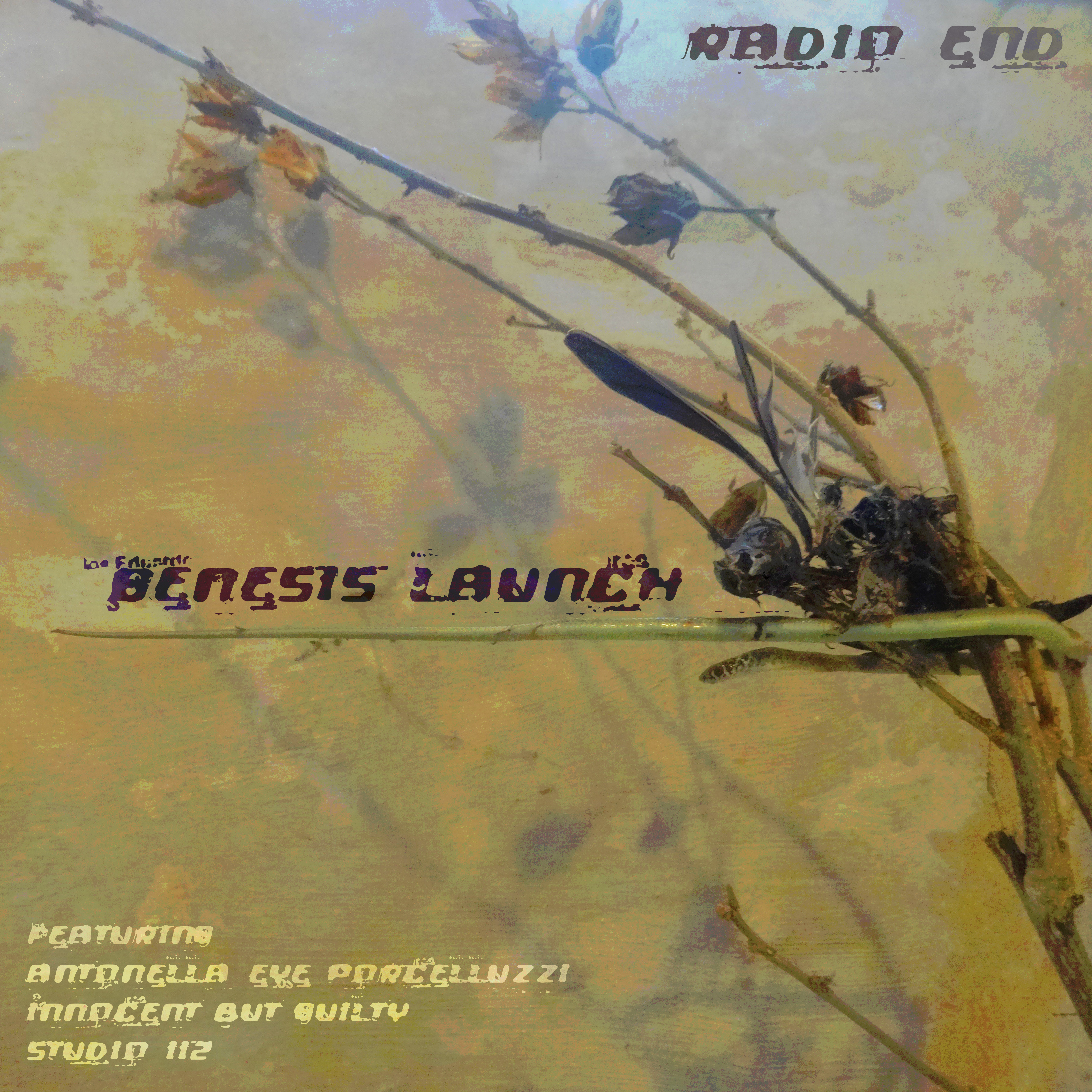 The necrophile hummingbird presents the allowed fruit of a process called rADio eNd.
About the surface of the album :
A rather surprising album that begins with a spoken word cut-up on a fat downtempo beat cut with an ax. Did I say Industrial Triphop ? It's probably unvoluntary but we can feel influences like Lydia Lunch, Annie Anxiety, Jarboe and The Lemon Kittens amongst many other. But then the music branches off into unknown territory with well-lit french lyrics and music that looks like nothing known. It's ... foreign music. Did I say Outsider music ?  You may agree with me that a passport for somewhere outside is pretty welcome when you're confined.
About the depths of this album :
If you've got a fruit in your hand, shall you bite it to taste it ?
The only certainty is that you'd better not forget to sow the seeds.
Did I say Do-It-YoursElf Spirituality ?

rADio eNd is a process more than a simple musical project...
It is a rhizome with multiple antennae that probes space and time in search of the keys that will allow humanity to leave the iron prison.
Appeared by magic in the fall of 2020, driven by an imperative necessity, perhaps this is linked to the authoritarian drift of the state in fRance combined with climate inaction.
Here the republic erected as a religion adorns itself with ideals such as Liberté Egalité Fraternité while nearly never having applied them. Their "brotherhood" is just a corruption network. It is mostly a name squatting for capitalism. As Antonella said "each one a self made religion", money is not my god, for me it would be humanity : the collective subconscious.
Indeed rather than a frontal fight which would amount just us to play a role in the tragedy, it seems to me that the main idea is to show that nothing is written.
Everything has to be written, all dreams are possible if we decide to write our future.
Thus rADio eNd is being set up, a collaborative pool to help the emergence of new sound forms, which borrows the versality of radio to free itself from any shackles.
Once again make resounding music resolutely not normal like a little light through the darkness...
We can also consider that it is an additional echo to the long chain of singularities that began with Necktar, then it continued with Necktar 2017 and then the specials PIKADON and "The World is Over!". Likewise the seeker of another chain of singularities, the one whose Multiple Personality 3, PIRATE Tapes and TKno BeurK are mainly the fruit of my collaboration with Alain Grille aka Studio 112. As well as lastly a mutation of Zone fusION which was already a collaborative pool, resulting from Necktar 2017. It is a lot, in any case it seems, that it is the junction of these three sources which gave birth to this synthetic vortex that is rADio eNd.

More informations about rADio eNd on the official page
http://horsnorme.org/rADio_eNd/rADio_eNd_english.html

The last step of the collaboration between Antonella & Innocent but Guilty is here antonellaeyeaynilporcelluzzi.bandcamp.com/album/path-5-love

The previous steps of the collaboration between Ed End & Studio 112 (Alain Grille) are on several other projects you may enjoy digg
TKno BeurK archive.org/details/Coronavirus_World_Tour_TKno_BeurK
PIRATE Tapes www.horsnorme.org/PIRATE_Tapes/
Multiple Personality 3 www.horsnorme.org/Multiple_Personality_3/

Track 1 to 6 and 8 poems by Antonella EYE Porcelluzzi

Track 7 Listen to my Voice

Extract from the book "Illumination Naïve" by Morne.

Under his milky disc,
when the night frees us from our flesh,
the mechanical reign is fading.
Our shadows can reach our bodies.
Essences flow between universes.
Our spirits emerge from the ruins,
the colors of life mingle with the light of the beyond,
touched by the grace of existing.

Under his blazing disc,
when the day imprisons us in our bodies,
the cogs of everyday life engulf us.
Disconnected from everything.
Isolated from the essential,
forced to play a sinister comedy,
dazzled by the artificial brilliance of the simulacrum.

Alternating current.
How many more cycles to wait?
Before the ideal configuration is achieved!
Before we decided to save ourselves!
Before freeing us!
When the decisive moment comes,
which initiates a-time,
the eternal present.

Direct current.
How many cycles before we remember
that we are the only pilot of the machine?
Symbiotes whispered us
how to escape from binarity.
Mutants are on no side:
mobile, evolving outside, outside the norm, invisible but everywhere.

Between Inhale and Exhale, the gap expands.

In everyone the senses are awakened,
through the veils of the oblivion's cocoon,
everyone makes their way.
No one wants to be a prophet,
but all of them as soon as one begins to speak,
can't avoid to vibrate.
Magic language,
which generates the artificial mechanism,
when we forget that it is operational,
that it should fit into the natural configuration,
to draw the shapes of life.

No one is predestined,
but the bud becomes a flower,
but the flower becomes fruit,
but the fruit becomes seed.

Inhale, exhale, between the two is hidden infinity.

Between Inhale and Exhale, the link is love.

- The fear.
Afraid of the change.
To exterminate all dangers.
Paralyzed by the unknown: we stop loving.
To prefer deny your uniqueness than to face hostility.
Fear breeds conformism.

- Conformism.
Carried away by the main stream.
To exclude all alternatives.
Formatted to follow the standard: we stop dreaming.
To prefer deny life than run the risk of being excluded.
Conformism breeds stratification.

- Stratification.
Bogged down by comfort in routines.
To cling with all your might to the material.
Imprisoned in a rigid identity: we stop breathing.
To prefer the certainty of death over exercising one's will.
Stratification breeds resignation.


- Resignation.
Sentenced to voluntary servitude
To delegate your choices to any authority.
Prisoner of certainties: we stop hoping.
To prefer the illusion of life to make an effort to embody it.
Resignation generates the proxy.

- Proxy.
Dispossessed of his free will.
To idolize simulacra.
Engulfed in the abyss: we stop living.
To prefer fantasize than to be an actor.
The proxy generates the disappearance of the being.

- Love.
Love begets the appearance of being.
To prefer embody than to remain a spectator.
Freed from lures: we begin to live.
To develop empathy.
To celebrate the franchise.
The being can radiate.

- The simplicity.
Simplicity breeds flexibility.
To prefer the essential instead of the superficial.
Aware of what complexity hides: we begin to find the meaning.
To decenter your focus.
The being can direct himself.

- Flexibility.
Flexibility breeds pedagogy.
To prefer to feel fully than to cling to the past.
Deliver from obscurantism: we begin to envision infinity.
To adapt to the unknown.
The being can mutate.

- Pedagogy.
Pedagogy generates synthesis.
To prefer invent his own way than to reproduce by mistake that of others.
Freed from imitation: we begin to become fertile.
To Experiment to know.
People can learn from their mistakes.

- Synthesis.
Synthesis creates a new era.
To prefer harmony to the imbalance resulting from ignorance of the whole.
Cured of binary violence: we are starting to be able to live together.
In all, to leave an opening for change.
The being can make his dreams come true.